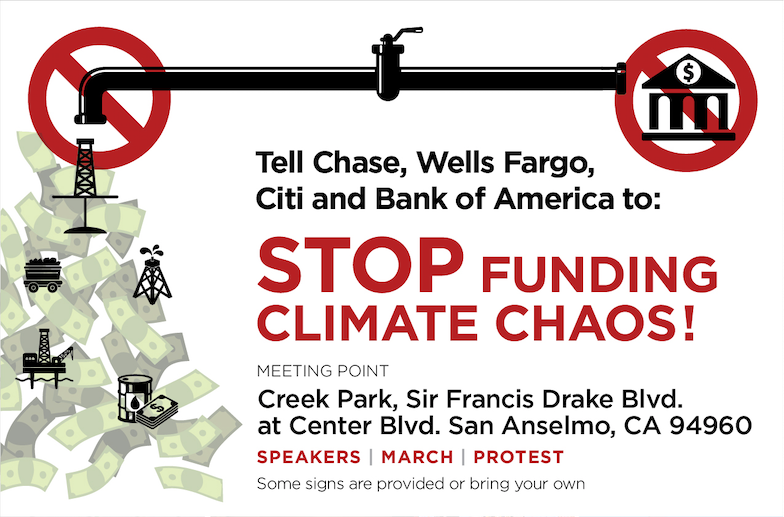 Join 350Marin, the Sunrise Movement, the Sierra Club Marin Group and Sustainable Marin on February 28th from 3-5pm for a rally and march in San Anselmo.  We’re going to tell Chase, Bank of America, Citi and Wells Fargo to end their massive money pipeline supporting fossil fuel extraction!  Help us let them know that we’re done with them putting their profit line over the survival of our world year after year!    These banks, which many of us use or have used, are a key source of financing for continuing fossil fuel use expansion and disruption of the global ecology.  JP Morgan Chase, for example, funded more than twice the dollar amount of oil, gas & coal development worldwide than Exxon did in 2018!

We’ll meet at Creek Park in San Anselmo at 3pm, at Sir Francis Drake and Center Blvd to rally.  Speakers will include the Sunrise Movement, and a 350Marin spokesperson on how we can move money out of the fossil fuel banks and investments. Barbara Clifton Zarate will speak on the climate crisis and indigenous rights, and give us an update on Keystone pipeline battles. Chance Cutrano from the Sierra Club on banning one-use plastics, we’ll hear Marilyn Price on the Climate Emergency Declaration campaign – and the Freedom Singers will sing! At 3:40, we’ll march to protest in front of Chase, Wells Fargo and Bank of America, then gather at the Hub intersection on Sir Francis Drake to rally and leaflet.
Download the event flier HERE, or by clicking on its image to the right.  RSVP with the form at the bottom of this page.  We look forward to seeing you in San Anselmo!